I have tried to making pizza at home since the early days of my first marriage. Forty-five years later I am still trying. The last time I made home made pizza, Michael asked me to please stop, reminding me that we have a Round Table Pizza just down the road. That's fine for a quick dinner that I don't have to cook, but I want to make my pizza when I have the time and inclination. Wah.

Yesterday I read a blog post by PJ Hamel on King Arthur Flour about the birth of gourmet pizzas in the late 1970's and early 1980's. I read every word, twice. I drooled over the pictures and wondered why everyone else could make pizza but me. Wah.

I have a gigantic pizza peel and an expensive pizza stone just sitting in the pantry. Before surrendering them to the Goodwill Store, I decided that despite the moratorium on homemade pizza, I was going to try one last time. And, I did!

As God is my witness, I will never go hungry for pizza again! I can make pizza. I am not a loser. Let me tell you how I did it.

Even though PJ's blog post was about exotic pizzas like smoked salmon and caviar and potato and fontina pizzas, I decided to start with the basics. My first attempt was a regular pepperoni pizza, something I had tried many times. The result was always a greasy mess on a forgettable crust. I had nowhere to go but up. Right from the starting gate I committed a major foul. I forgot to add salt to the crust. The crust was bland and according to Michael, reminiscent of Catholic Church communion wafers. I fed the first batch to the goats, emus, donkeys and chickens and started over. Wah.

The dough recipe I selected was from Jeremiah Tower's Potato, Fontina Cheese, and Fresh Sage Pizza in Jeremiah Tower Cooks. I will ask you to refer to PJ's blog post for the recipe. The second time I made it, with salt, it came out perfect. The recipe calls for kneading the dough for fifteen minutes but I can't do that with my arthritic hands. I simply placed all the ingredients into my bread machine , set it on the dough setting and let it do the work for me. An hour and 28 minutes later I had pizza dough.

I turned it out onto a floured baking mat, formed it into a round ball and let it double in size again.

I cut it into four sections and began to assemble the pizzas.

As I mentioned earlier, one of the primary problems with my pepperoni pizzas in the past was all the grease. A visit to an online pizza forum offered a few solutions, inching cooking the pepperoni before putting it on the pizza, blotting the grease and after the pizza bakes, and microwaving the pepperoni . I decided to try the microwave trick. The suggestion was to place the pepperoni pieces in between paper towels and microwave for 15 seconds before adding to the pizza. It works! The idea is not to cook the pepperoni, just heat it a bit to melt the fat. I recommend starting at 10 seconds and then more time, 5 seconds at a time. My microwave is low power, so 15 seconds worked fine.

My goals on this pizza redemption challenge was all about the crust and the grease. Eventually I would like to test pizza sauce recipes but without a good crust, the sauce doesn't really matter. So for this time I used canned sauce, specifically Muir Glen Organic pizza sauce, which was excellent!

Another trick I learned from KAF was to assemble the pizza on parchment paper and then just cut or tear the extra away. Stroke of genius! I have always had trouble getting the pizza to slide off the peel onto the hot pizza stone. It works perfectly with the parchment paper.

This dough uses a lot of olive oil. At first I was worried about it, but it makes a dough that is so easy to work with. I was even stretching and tossing the dough into the air. After it bakes it is light and airy but still with a good chew. I found that it browns nicely when the edge is brushed with a little olive oil before going into the oven. To keep the edge moist I brushed it again when it came out of the oven.

My pizza was simple. Dough, sauce, shredded mozzarella, a little grated parmesan, thinly sliced red onion, and pepperoni.  I tossed on a little torn fresh basil when it came out of the oven. We liked this pizza so much that we had it for dinner last night and again today. The dough recipe makes about four small pizzas. The extra dough kept well in the refrigerator in a ziplock bag over night. 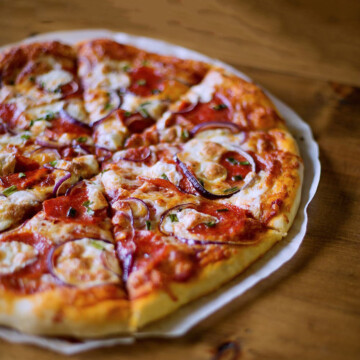 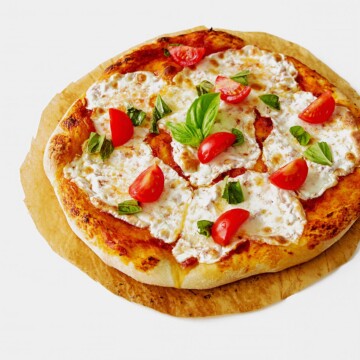