I hate seeing anything in the garden go to waste, but I am out of fresh ideas for cooking with eggplant. Even the chickens run for their lives when they see me coming with a bowl of sliced eggplant. Oh, the guilt and shame.

Last night I actually laid in bed thinking about what I could do with at least one of the five ripe eggplants in the garden right now. I finally gave up trying to think of a new recipe highlighting eggplant and started thinking about ways of hiding it. Thus was born, Country Gravy with Eggplant. No, not the eggplant gravy featured in Indian cuisine with curry and other exotic spices, but creamy country gravy poured over hot biscuits.

This foolish idea was still in my head this morning, and the purple eggplants were bigger than ever, so I decided to give it a try. I substituted cooked diced eggplant for sausage in the gravy. It was divine! I ate so much straight out of the pan with a spoon I feared there would be nothing left to photograph. My new Pescatarian eating plan doesn't allow pork, but with this recipe you don't even miss it! 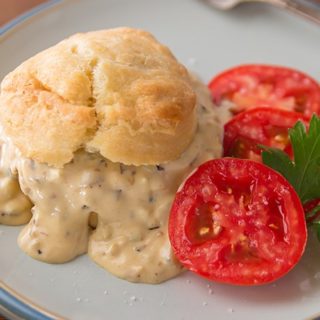 For a vegetarian version of biscuits and gravy, substitute eggplant for the sausage. All of the flavor, with none of the pork!
5 from 1 vote
PRINT Pin
Prep Time 25 mins
Cook Time 10 mins
Total Time 35 mins
Course Breakfast, Brunch
Cuisine American
Servings 2
Calories 304 kcal

Keyword country gravy, eggplant, store bought biscuits
Tried this recipe?Let us know how it was! 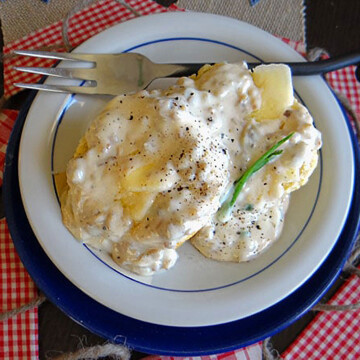 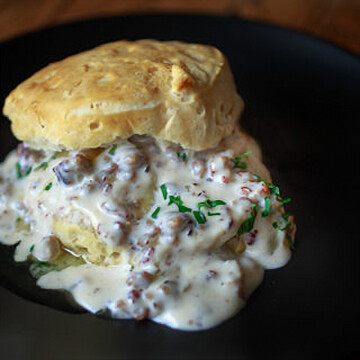 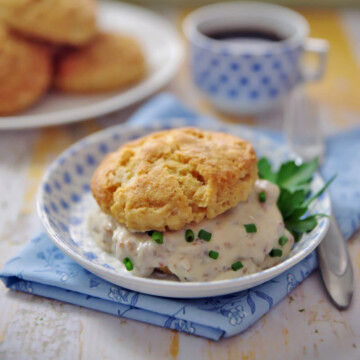