Today marks first day of Hanukkah. By best friend Susan is Jewish and I like to mess with her when it comes to traditional food like latkes and kugel. It's been two years since I last messed with her regarding latkes, so I thought it was time to do it again. So today I took my latke recipe and went all meshugana with it. In case your best friend isn't Jewish, meshugana means crazy, nonsense, foolishness, as in Purple Potato Latkes. Yes, I made latkes with purple potatoes. Aren't they pretty?

On the morning news show they had a Jewish caterer demonstrating how to make latkes. When the subject of onions came up, she went all meshugana on the anchor woman. The specific question was whether or not laktkes should have onion in them. The lady from Bubbie's Luv said that latkes without onion are hash browns. The host disagreed. I couldn't for the life of me remember Susan's stand on latkes and onions, so I improvised. I fried little rounds of cipollini onions and stacked them between the potato pancakes. It's a win-win situation. My potato latkes have and don't have onions.  And this time I remembered the applesauce! 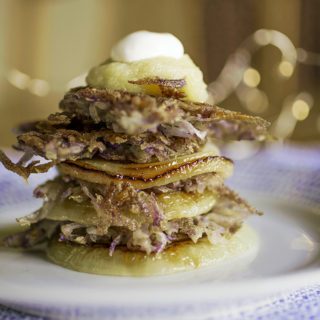 Keyword latkes, purple potatoes
Tried this recipe?Let us know how it was!