Michael grew up in Hawaii, on the island of Oahu. Since we first met, he has talked about manapua, or steamed pork buns. In my trips to Hawaii before I met Michael, I had never tried Hawaiian Style Manapua Buns. Steamed bread dough, with a dollop of bright red pork in the center, didn't sound particularly tasty.

A few years ago Michael and I took a trip to Oahu and he ate manapua in restaurants and from food cases in convenience stores. Manapua is available all over the islands, from street vendors to fine dining restaurants. I tasted one, but still was not impressed.

Food blogging exposes us to things we might never have tried before. Presented in a different way, or captured in a photo good enough to eat, non-traditional foods or even once-hated foods find their way onto our plate. This is how it happened with me and manapua. I saw a beautiful photo of sparkling white, steamed buns with a smidgen of that bright red pork in the center. I decided to make them for Michael and in the process, fell in love with them myself.

I did a lot of online research before deciding which dough recipe and cooking method I would use. The Chinese version of these buns are called bao while the Hawaiian's call them manapua.  There are subtle differences such as the use of both yeast and baking powder in the Manapua dough, as well as the addition of sesame oil. Bao are usually smaller with the seam side up, while manapua are round with the seam side on the bottom. They can be filled with all kinds of meats, vegetables  or tofu, but the one Michael likes and the most popular in Hawaii, is the char siu pork. The term "char siu" refers to meats which have been marinated in char siu seasoning. The char sui seasoning can be prepared from scratch or from store-bought char sui seasoning in a pouch or a jar. I like this jarred version. (Update: I have included a recipe for homemade char Sui BBQ sauce!) You can make it from scratch, use a jarred sauce, or if really short on time, pick up char sui BBQ pork at your favorite Chinese restaurant.

The pork is slathered with the char sui BBQ sauce then roasted in an oven or over a fire. I used pork loin cooked on my indoor grill.

The cooked pork is finely diced and seasoning, onions, and wine are added to make the filling. It should look like this with small cubes of pork, onions, thick sauce and a bright red color.

The dough can be made by hand or using a stand mixer. The dough takes about an hour for the first rise.

The dough is divided into 16 equal pieces.

Keep the dough pieces covered with plastic while filling one at a time so they don't dry out.

Place the dough pieces on a floured surface.

Use a small rolling-pin to form them into 5" rounds, slightly thicker in the center.

You can form them by hand too.

Place a tablespoon of filling in the center.

Close the dough by pinching the edges together. Traditional Hawaiian manapua goes seam side down on a small piece of parchment paper. Once all the buns are all filled, cover them loosely with plastic and allow them to rise for 30-45 minutes.

Place the buns on the parchment on a steamer insert. Don't crowd them as they puff up when cooked.

I use my electric steamer. Works great! Steam the buns for 15 minutes.

Raise the lid and allow the steam to escape. leave them in the steamer like this for 5 minutes. The water on the inside of the lid should drain off without wetting the buns.

Use tongs to take the steamed buns out of the steamer.

Here are some that I steamed with the seam side up. I like the looks of these better. Pssst, "Don't tell Michael."

BTW, he said these are the best manapua he has ever eaten. He said the kicker was the way the pork was trimmed to remove all the fat and other things you wouldn't want to bite into. We will definitely be having these again. Michael says at least once a month. I can do that! 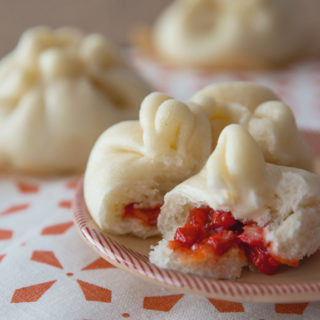 To make the dough in a stand mixer:

To make the filling:

Cook and prep times are just approximations. Your skill level and steamer size will dictate how long it takes.

Keyword buns, Hawaiian, manapua, pork, steamed
Tried this recipe?Let us know how it was!

"Aloha nui loa" to Tim and Cheryl. You need to make these at home or come down and we'll make them for you! 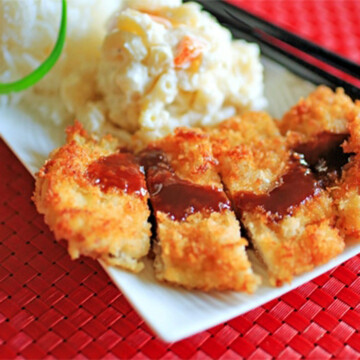 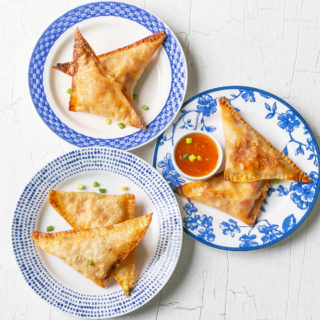