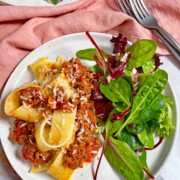 In 2016, the year I wrote this post, I had just finished two online Italian cooking classes taught by Marcella Hazan's only son, Giuliano Hazan. I started with Classic Italian Pasta Sauces: Seafood & Vegetable, which did not include red sauces, then his second class, Classic Italian Pasta Sauces: Meat & Tomato which did. I not only learned a lot about Italian sauces, but I got a great appreciation for Giuliano, his reverence for his late mother, and their cherished family recipes. Sometimes it felt a little bit like being in church. Craig Claiborne said of Marcella Hazan's work, "No one has ever done more to spread the gospel of pure Italian cookery in America". Indeed.

Why Is This Recipe So Special?

Add oil, butter and onions to pot over medium heat until onions are soften.

Add carrots and celery and cook for two minutes until everything is coated.

Add ground beef to pot and cook using a fork to break up the meat.

Add milk to pot and simmer on low heat. Check frequently and stir.

Continue simmering until all the milk has reduced down.

When the milk is reduced all the way grind fresh nutmeg into pot.

Pour one cup wine into pot. Simmer until wine is completely reduced.

Continue simmering until the liquid is gone.

Add the tomatoes to the pot. Stir and simmer over very low heat for 3 hrs.

If the pot gets dry add water 1 cup at a time to prevent sticking and burning.

Done when liquid is gone, leaving only meat mixture and grease. Ready to eat.

Do you cook Bolognese sauce covered or uncovered?

You cook Bolognese sauce for hours uncovered so that the sauce reduces and the flavors really intensify. You get reduction by evaporation and that is achieved by cooking it uncovered. Liquids are added one at a time and the next is not added until the previous one has reduced completely down. This allows the milk, the wine, and the tomatoes to add their individual flavors to the dish.

Why do you put milk in Bolognese sauce?

Most of us aren't used to adding dairy to tomato meat sauces. Adding milk to bolognese adds a richer depth of flavor, and it tenderizes the beef.

Whats the difference between meat sauce and bolognese?

Bolognese is a kind of ragù, which means "meat sauce" in Italian originating in Bologna, Italy. This meat sauce (ragù) is celebrated by Italians. It is not the same as Americans think of meat sauce. American meat sauce is often a tomato-based sauce simmered with ground beef. Bolognese is much thicker, creamier, and with just a touch of tomato.

Who is Marcella Hazan?

Italian-born Marcella Hazan was a scholar, teacher, home cook, and cookbook author. Her book The Classic Italian Cookbook was released in the spring of 1973. When her publisher refused to submit her 1992 book, Essentials of Classic Italian Cooking for consideration for the James Beard Awards, she submitted the book on her own—and won, in the category of Best Italian Cookbook.

At her passing in 2013, Lidia Bastianich, herself a famed NYC restauranteur, proclaimed Ms. Hazan as “the first mother of Italian Cooking.” She has been credited with changing the way Americans cook Italian food. The New York Times polled readers after her death, asking which of her recipes were staples in their kitchens. “Bolognese” was usually the answer. She had a few recipes for the classic sauce, but The NY Times published Marcella Hazan's Bolognese Sauce recipe that appeared in her book “The Essentials of Classic Italian Cuisine.” 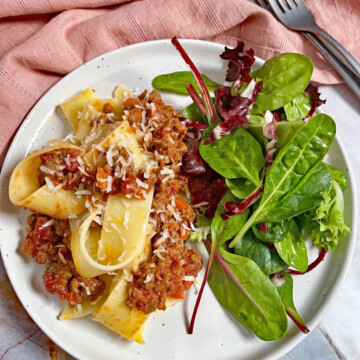