New Zealand littleneck clams, also called cockle clams are harvested in the clear unpolluted waters of New Zealand's Southern Pacific Ocean. All harvesting, processing and packaging operations comply with the New Zealand government, USFDA and EU standards. They are listed as a "good" alternative on the Monterey Bay Seafood Watch program. Their beautiful green shells drew me in at the seafood counter and I decided to give them a try. I have never cooked live clams before but I am familiar with cooking live mussels. I bought three pounds of live, wild caught New Zealand clams to use in my clam chowder recipe.

Fresh mollusks, like mussels and clams, must be cooked live if not purchased frozen or canned. Have the person behind the counter make sure that you are getting live clams. If they do not close their shell when touched or rinsed in cold water, they should be discarded. They can also contain a lot of sand and grit so they must be cleaned before cooking. When you get them home, immediately remove them from the plastic bag, and soak for at least 30 minutes in a bowl of cold water. This will allow to clams to release the sand. Do not pour through a colander because the sand will have settled to the bottom and you'll be pouring it back over the clams. Pick the clams out with your fingers or tongs and discard the water. Use a firm brush to scrub the outside of the shell to remove any additional sand or debris.

If you are using the clams in a recipe where they will remain in the shell, they are ready to use. I was making chowder so I needed to steam the clams until the shells opened and I could remove the clams. I did this by bringing a couple of inches of water to a full boil in a large stock pot with a steamer basket in the bottom. Drop the clams into the pot and immediately cover with a lid. Allow the clams to steam for about three minutes. Remove the opened ones and continue steaming the remaining clams until the shells open. Sometimes hard-shelled clams take a bit longer than other clams to open. If they don't open, discard them.

This picture will give you an idea of the size and shape. They look like teeth and nobody wants clam chowder with teeth in it!

I left the oysters whole since they were small but you can chop them for more clam flavor.

This chowder is best eaten with a big spoon and a couple of slices of buttered bread.

Yum. If I was served this exact chowder in a fancy restaurant I would leave a big, fat tip! 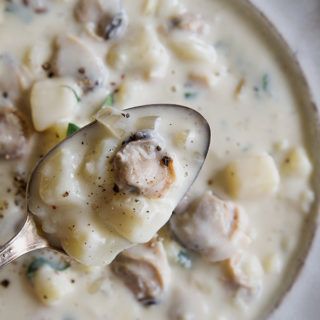