Jalapeño Poppers with Bacon are my favorite appetizer.

I'll share a little secret with you. If you live in an area that is suffering from extreme drought like we are here in California, you might not want to plant jalapeños. They say peppers love heat and that's no lie. My jalapeños are very hot this year. I cannot remember ever eating a jalapeño with the Scoville units in the stratosphere until I tasted the peppers from my little plant. To clean the peppers I wear disposable gloves and tie a dish towel around my head to cover my nose and mouth. Even so, I cough violently once the first pepper is cut until the air clears about an hour after the last. Does all that stop me from eating them? Nooooo.......

I have always loved to order jalapeño poppers whenever they are on the menu. The infirmities of age and indigestion have slowed me down these days. But, the sight of a dozen big, green jalapeño peppers shimmering in the morning sun caused me to throw caution to the wind today. I picked the peppers and set about making jalapeño poppers for lunch with homemade ranch dressing and that little purple pill!

The shiny green hellions were stuffed with cheese, dipped in buttermilk, dredged in Panko bread crumbs, wrapped in bacon, then deep-fried. Despite the heat, they were delicious. I cooked three and froze the rest for another day, maybe this winter if our heater goes out again. These will warm us up from the inside out. 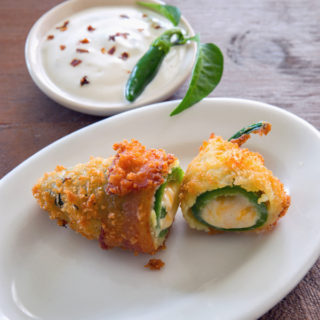 This recipe would probably work well with whole pickled or canned jalapeños. I love the crunch of the fresh jalapeño but would have preferred a little less heat. Michael agreed to try one. He started with a small bite and declared them tasty with a little sweetness. He asked for another bite but this one sent him running to the kitchen for water, whining like a baby. 🙂 I think I'll have to eat the rest of them myself.