Cincinnati Chili (or “Cincinnati-style chili”) is a regional style of chili con carne characterized by the use of seasonings such as cinnamon, cloves, allspice or chocolate. It is commonly served over spaghetti or as a hot dog sauce, and is normally of a thin, sauce-like consistency, unlike most chili con carne. Restaurants that feature Cincinnati chili are frequently called “chili parlors”. Cincinnati chili seems to have originated with one or more immigrant restaurateurs from Macedonia who were trying to broaden their customer base by moving beyond narrowly ethnic styles of cuisine.

Ordering Cincinnati chili is based on this ingredient series: chili, spaghetti, grated cheddar cheese, diced onions, and kidney beans. The number before the "way" of the chili determines which ingredients are included in each chili order. Thus, customers can order a:

I stumbled across Saveur's recipe for Cincinnati Style Chili while looking for a good chili recipe to make for tonight's dinner. I have heard about this style of chili but have never tried it, until today. I followed Saveur's recipe to the letter. Most of the commenter's who have tried the real deal agree that the taste is spot on for Cincinnati chili. As it simmered away in my kitchen, the aroma was amazing. Even more amazing was the taste. If you decide to try this, don't go into it thinking "Tex-Mex" chili. This is something entirely different, but in a good way.

I enjoyed mine, Five-Way! 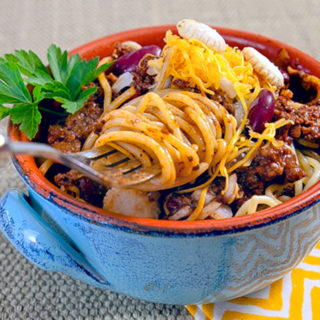 Keyword chili, cincinatti, spaghetti, style
Tried this recipe?Let us know how it was!