I love spicy food and jalapeño poppers have always been a favorite. Is it just me, or have jalapeños gotten hotter in the last few years? I have tried store-bought, farmer's market peppers, and home grown. Too dang hot! Enter Coolapeno Jalapeño Poppers!

This year while shopping for plants for my garden, I came across "Coolapeños" by Bonnie Plants. They are like regular jalapeños with the heat removed. Too good to be true? I bought three plants and crossed my fingers. Today I picked three medium sized peppers and made Coolapeño Jalapeno Poppers. I was prepared for them to still be hot, but they were not! Two of them had no heat at all and the third just a little. They were delicious! Michael even ate them and declared them "bomb diggity!" I wish I had planted more. Here's my recipe which would work with any jalapeño pepper you like, hot or "cool!"

Here is a fresh take on jalapeño poppers, it's my Jalapeño Popper Wontons! Another twist on jalapeno poppers comes from my friend Brittnay who smokes her poppers! Check out Smoked Jalapeno Poppers. 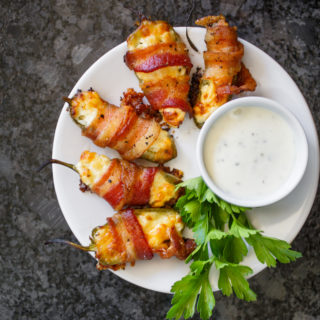