One of my favorite cooking shows is The Best Thing I Ever Made on the Food Network. In the episode "Tasty Travels," Andrew Zimmern shared a recipe for Grandmother's Chinese Chicken Wings. He could not say enough about how good these wings are, so I decided I had to make them myself. I found the recipe online and read all the positive reviews before starting. I like to try a recipe as written the first time before putting my own spin on it but I knew there were a couple of things I would like to do differently. A few reviewers noted that the recipe is slightly different from the video, so be aware of that if you follow the recipe at Food Network.

We like crispy skin on our wings so I chose to cook mine in a hot wok with oil. Next time I may even try deep-frying the wings first for even crispier skin.

There was a lot of spitting, sputtering, and steam, but what a beautiful day for it!

The Asian-style sauce has scallions, soy sauce, brown sugar, ginger, mirin, oyster sauce, star anise and cinnamon. The sauce is assembled in a bowl then poured over the wings as they cook. Eventually the sauce thickens and becomes sticky.

I followed Andrews suggestion to emulsify the chicken fat into the sauce by turning up the heat at the last-minute to boil the fat into the other liquids. Then I poured it all into a fresh pan for garnishing and serving.

Delicious! Thanks to Food Network and Andrew Zimmern for a great wing recipe! 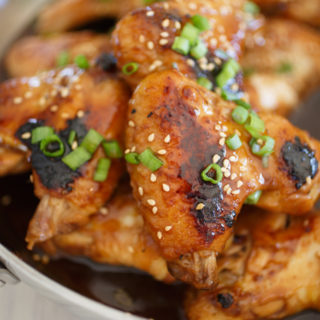