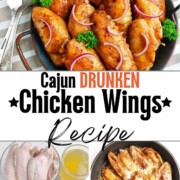 Everyone needs a new chicken wing recipe in their collection, right? My Cajun Drunken Chicken Wing Recipe is a spin on the popular Beer Can Chicken recipe with a Cajun twist. If you're cooking for two, this is perfect. If not, double or triple it and cook the wings in batches.

Everyone has probably heard of Beer Can Chicken wherein the hen sits unceremoniously on a hot grill with a can of beer up her behind. Also known as chicken on a throne, beer butt chicken, coq au can, and dancing chicken, its first documentation can be found in the Houston Chronicle in 1993.

Beer can chicken is a barbecued chicken dish often used when cooking for larger groups. The chicken cooks via indirect heat, in the form of open can of beer inserted into the chicken cavity. The can also holds the chicken vertically while it cooks. In a perfect world, the beer in the can steams the meat from the inside out adding moisture and flavor. Because the chicken is in an upright position, the fat in the bird drains away and the skin is evenly cooked. Some people are enthusiastic proponents of the dish, while others consider it a waste of a good beer. We decided to leave the drama behind, not take sides and utilize the best parts in our Cajun Drunken Chicken Wings Recipe. No long time cooking needed, no basting for the last hour, no messy grill to clean, no scrubbing the bottom of the pot, just tender chicken wings from the very first time you make them!

Combine spices in a bowl with chicken. Mix well and let sit for ten minutes.

Heat skillet with vegetable oil. Cook wings on back side until crispy.

Turn wings over and continue cooking until crispy on the second side.

Carefully add the beer and cook over low heat until all the liquid is absorbed.

Continue cooking and turning until wings are glazed evenly all over. Turn heat off.

You don't need a grill or charcoal, an instant pot or a slow cooker, a heavy pot or a crock pot. I once went to a lot of work getting a beer can chicken ready to barbecue only to find that the lid to the grill would not close due to the height of a chicken standing upright! Not anymore. The only equipment needed for my Cajun Drunken Chicken Wings Recipe is a large bowl in which to season chicken, a non-stick skillet for frying and tongs. I like serving the pieces of chicken in a shallow bowl for the best presentation. In reality, these will be gone so fast, no one will notice how you serve them!

Make more of the spice rub than you need and store the leftover seasonings in an airtight container in a dark, dry place like where you store all of your spices. It is perfect sprinkled on a whole chicken, pieces of chicken, pork chops, salmon, white fish, beef, pasta, salads or anywhere else you want to put a little Cajun heat. White rice, cooked in chicken broth, topped with an oven roasted chicken breast with Cajun spice, a little brown sugar and buttered bread crumbs is a perfect summer meal. We discovered this in one of our home-delivery meal service boxes. I think it was Martha Stewart and Marley Spoon, but I am not sure. We tried them all! 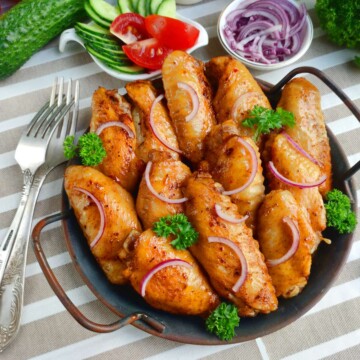 Speaking of flavorful chicken wings, you have to try my Grandmother's Chinese Chicken Wings.