I have recently re-acquainted myself with JoJo potatoes; not because I have a weird craving for them, but because they are displayed in my local Safeway Market in the cutest red and white checked pouches. They remind me of the snack bar food at the drive-in movie when I was a teenager. Always on the look-out for cool food photograph props, I knew I had to have a couple of these pouches. On my last two visits to the store I ordered a serving of JoJo potatoes, just for the cool red and white checked pouch.

What really surprised me was how good the JoJo potatoes tasted. I decided to try to replicate them for my Super Bowl Party for two this afternoon. Laziness and a lack of canola oil prompted me to bake them instead of frying. They were really good, just as crispy and crunchy as I imagine they would be had they been fried. And, just look at the cute red and white checked pouches!

If you haven't tried JoJo potatoes or are too young to even know what a drive-in movie is, you simply must try these. The heat can be adjusted according to taste. If you don't have chili oil, add a little cayenne pepper to the flour. 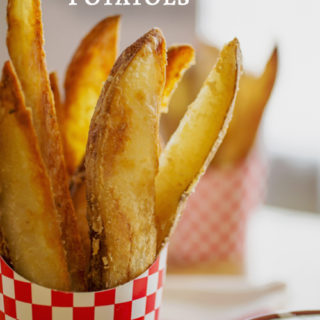 Just like the potatoes you see in the cooked foods at the deli counter in the market but for two people! Big wedges of russet potatoes, baked until creamy on the inside and crispy on the outside.
5 from 1 vote
Print Recipe Pin Recipe
Prep Time 12 mins
Cook Time 15 mins
Total Time 27 mins
Course Side Dish
Cuisine American
Servings 2
Calories 228 kcal