While blog hopping yesterday I ran across a picture of pistachio biscotti. I looked at several recipes, took the best of each and made pistachio almond pistachio biscotti with orange zest, dipped in milk chocolate and sprinkled with chopped pistachios. It sounds like a really complicated cookie but it really is easy. I must admit I had to make two batches because I burned the first batch.

Biscotti are baked twice and the cooking time was too long for the first baking. They were already too brown on the bottom when I realized that my donkeys were out of water. Heaven forbid they drink from the irrigation ditch. While I was filling the donkey watering trough, my cookies were getting very brown on the bottom. I took them out of the oven, sliced them for the second baking, and put them back in the oven for the second baking. I was still hoping to salvage them. The biscotti death knell occurred when I turned off the oven after the second baking but failed to take the cookies out of the oven. The acrid smell of smoke wafted into the living room, prompting me to step away from my computer to check things out. That is when I realized the cookies were still in the oven. Hmmmm. They were officially beyond hope for humans but still fit for chickens, goats, donkeys and emus. I tried to break them into smaller pieces but they were too hard to break with my old lady hands. I had to drag the food processor in from the service porch to chop these cookies up for the animals. The good news is the animals loved them, except for little Diana who spat hers out on my foot. She's like that.

The really good news is that I made a second batch that didn't burn. This was a bit of a miracle in and of itself. I had to go into town for a dental appointment, leaving Michael to take the biscotti out of the oven after the second baking. I set the oven timer and he set a timer on his cell phone and I drove off, hoping for the best. I returned to the house smelling of almonds and orange and perfectly light golden brown biscotti on the kitchen counter.  All that was left to do was dip them in melted chocolate, add chopped pistachios and brew the coffee.

Here are the lovely biscotti, photographed this morning with a cup of espresso and cream and a newspaper article about our beautiful 1800's farmhouse. 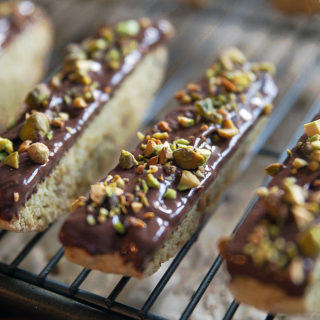