Bright red rhubarb stalks have hit the grocer's shelves. I bought some and went online searching for something different to do with it. I found a recipe for Rhubarb Ginger Jam on the British blog, frugal feeding. Nick's recipe has measurements in grams and calls for "forced" rhubarb and "stem" ginger. You can click on the links for more information, but forced rhubarb is rhubarb that is "forced" to grow indoors in late winter to early spring. It is bright red and tender because the season lasts just a month before the plants need to be moved outdoors. I have never seen "forced" rhubarb here in the US, but now that I think about it, don't we force everything to grow and then harvest it before it ripens? Maybe I have bought forced rhubarb and just never knew it. Hmmm. Stem ginger is tender, young ginger root preserved in syrup. You can buy stem ginger on Amazon but I found the shipping to be prohibitive. I may have to cave in and order some because I have a new-found love of ginger and I must try all things ginger. I never liked ginger before. Go figure. I used Nick's recipe as inspiration and created my recipe for Rhubarb Ginger Jam, minus the forced rhubarb and stem ginger. It is spectacular, if I do say so myself. The rhubarb makes it tangy and the ginger gives it a real flavor kick. I plan to use some of my jam to make Rhubarb Ginger Jam Cake, also from frugal feeding. My work-around for the not having stem ginger was making a ginger syrup. It is best when allowed to sit overnight. I made the ginger syrup in the evening and made the jam the following morning. This beautiful jam will be topping my morning toast, and I can't wait. 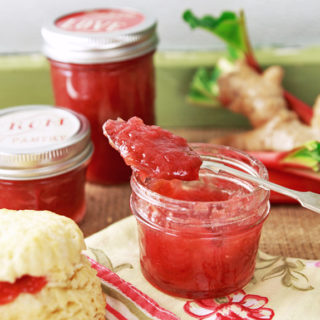