Steelhead trout are related to Pacific salmon, but they are actually the same species as rainbow trout.

Steelhead live in streams and rivers all along the California coast.  Steelhead trout grow much bigger than rainbow trout, which stay in streams. They may spend one to four years in fresh water, then one to four years in the ocean. They usually migrate back to fresh water after two years in the ocean. Unlike salmon, steelhead do not necessarily die after they spawn. They will often go back to the ocean, and then return to fresh water to spawn again. This makes them more sustainable and less expensive than salmon.

The last salmon I bought was expensive and a big disappoint at the dinner table. The taste was fishy and the flesh was mushy instead of firm.

As I stood in front of the seafood counter yesterday trying to decide what to buy, the butcher asked if I wanted salmon. I related my experience with the last salmon I bought and told him I wasn't ready to try it again. He asked if I had ever eaten steelhead? He explained about it being almost identical to salmon in taste and texture and less expensive. I decided to give it a , asking for a pound, cut in into two filets. He took a whole large filet from the case, cut two generous portions from the thickest part of the fish, wrapped it and give it to me, free of charge. I thought that was quite nice considering it had been weeks since the salmon purchase and I didn't have a receipt. I appreciate when someone makes an effort to keep my business.

We decided to smoke the steelhead since that was the way we prepared the salmon. It would be the best way to make a comparison. I seasoned the fish with my favorite Potlatch seasoning and took it outside to the smoker. Michael guided me through the process of lighting the smoker from the safety of a floating lounge in the pool. I lit the smoker, ignited a ball of propane that built up while I fiddled with the knob, and burned all the hair off my right arm. Things could only get better from there.

We smoked the fish at a low heat of about 180-200 degrees for about an hour and a half, until it was firm to the touch. While the salmon smoked, I made a salad of fresh spring greens, sliced pear, and Wingnuts, a locally made trail mix and gourmet topping, made all the better with poppy seed dressing.

The fish looked and smelled great and best of all, it was wonderful! We devoured it with glee. I would not have known it wasn't salmon if I didn't already know. It was not too fishy and we loved the firm texture created by smoking it. We liked it so much that I returned to the store today and bought another four pounds. We actually had the same meal for dinner again tonight!

If you don't have a smoker, you can get the same result on your grill using indirect heat and wood chips in a small tray. Make sure to soak the chips for at least 30 minutes in water so that they smoke and don't burn. 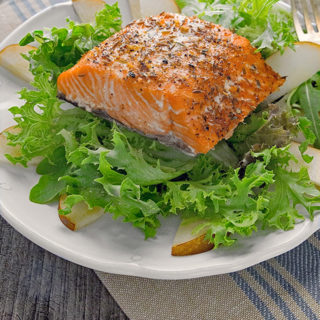