Michael and I have tried to get in a trip away to the coast for a couple of months now. I need some clam chowder from The Tides at Bodega Bay. Standing between me and that chowder are forty chickens, four emus, two donkeys,  two goats and an incubator full of eggs hatching over the next three weeks. I couldn't wait. I had to have clam chowder today. That meant I was going to have to make it myself. So, I did and it was delicious. Michael declared it better than the chowder at The Tides but I am not as certain. I haven't been to The Tides in years. I'll get there, but until I do I can make this. So can you. This soup is easy to make and so much better than canned soup. 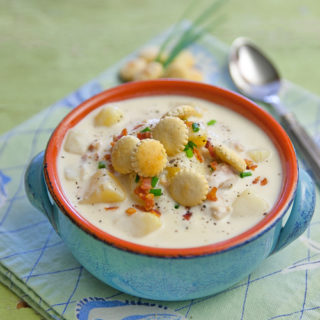 Keyword chowder, clam, crackers, soup
Tried this recipe?Let us know how it was!

If you like clam chowder, you'll love these other variations!

While we are on the subject of clams, why not try my White Clam Sauce? It is fabulous!