I'm back with a new recipe created just for summer. With temperatures in the 100+ range for the last week, the last thing I want to do is cook. The problem is, I saw a show on Food TV featuring clam chowder and I had to have some. It is entirely too hot for the thick creamy clam chowder we love in the wintertime, so I created a version more suited to sweltering heat. The base of this soup is more of a thin broth, with just a bit of cream added. As an homage to the sweltering Sacramento valley heat, I added fresh local corn. It will be out of season soon, so I am using it every which way I can until it's gone. There is just nothing comparable to local summer corn and it is perfect in this soup. Tip: I added the corn cob to the pot while the potatoes cooked, then scraped every bit of corn off the cob right into the pot.

I used only one pan while cooking the soup, and believe it or not, it was a large non-stick skillet. This is a quick soup, not one that simmers on the stove all afternoon. I used fresh clams as well as canned clams, but you could use all fresh or all canned. Here's the recipe! 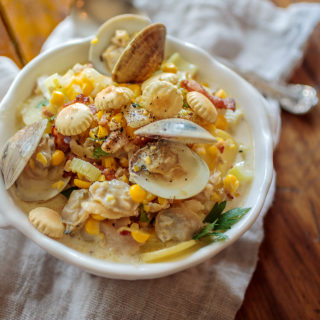 If you like clam chowder, you'll love these other variations!

While we are on the subject of clams, why not try my White Clam Sauce? It is fabulous!