Oysters are one of those foods that people either love or they hate, rarely straddling the fence. My mother used to make oyster stew which is actually more of a soup. I loved it.

Michael and I always seem to find somewhere to eat oysters when we travel to the coast. The best oysters I have ever eaten were at a little campground near Gualala, CA. Michael and I were camped near a man who was selling fresh oysters and we bought some. In those days we always ate them fried, and those were the best fried oysters ever!

I have never tried raw oysters and don't ever plan to but Michael and I did try grilled oysters and we are hooked! The first time we grilled oysters we nearly burned the deck off the house. Another time we left a huge grease stain on the deck. Today we took no chances and placed the grill on a big vinyl tarp. The cooking method for grilled oysters involves high heat, hot shells, and poured butter. Care must be taken when grilling oysters but it is well worth the effort. In a previous post about grilled oysters, I shared the secret for shucking them without a trip to the E.R. Do yourself a favor and buy an oyster shucker!

I picked up two packages of fresh oysters today and we grilled them for dinner. I changed the butter sauce a bit this time and left off the hot sauce. They were loaded with Parmesan, garlicky goodness! If you love oysters try this and if you hate oysters try this. You might become and oyster lover! 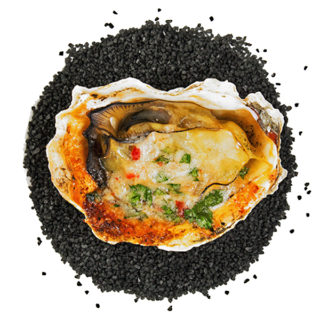