Have you seen the television commercial for the Jack Daniels Burger at TGIFridays? It looks so good when they smash the top down and the sauce oozes over the burger. I have been on strike this week, refusing to cook until the downstairs A/C unit is replaced. However, I saw that commercial and decided that, despite the sweltering heat in my kitchen, I was making that burger. I searched online and found a copycat recipe that has received rave reviews. People said it tastes just like the original. Since I haven't tasted the original, I didn't have that comparison to make but it sounded like a good sauce recipe. I headed off to the store for ingredients. I wanted to make the sauce early in the day since it needs to simmer for an hour and grill the burgers later in the day. I stopped by the liquor store for one of the little airplane sized bottles of Jack Daniels. I made the sauce and created this great burger. Michael said it was the best burger he's ever eaten. If you follow my blog, you know he says that a lot, but I think he meant it. He actually asked to have the same thing the next night.

I agreed, but switched it up a bit last night. I made sliders with the sauce and crispy fried sweet potato strings on top. This was unbelievably good. My goodness. The patties I used both nights are from my local Holiday Market. They call them Black and Bleu burgers. They mix in a cracked black pepper sauce, crumbled bleu cheese, and dust the patties with a pepper rub. They are the only pre-made burgers I have tried that I liked.

The recipe calls for a tablespoon of Jack Daniels but many commenters recommended adding more. I actually quadrupled the amount. I also decided to skip the step of roasting garlic for an hour. That was not an option with the A/C out. I substituted garlic paste for the roasted garlic. The recipe I used can be found here and many other places on the web. Here it is with my changes made. I will definitely make this sauce again and will make extras for gifts. Who wouldn't like to get a jar of this sauce? 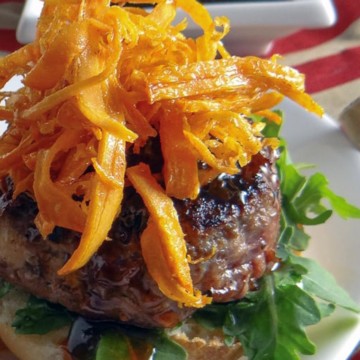 Nutritional information is for approximate one cup of sauce. How you use it will determine the values.